It was a great invention in fire safety science that saved millions of lives every year.

Although smoke detectors are made for sensing fire in the building but the alarm is often triggered by vape clouds, steam, and sometimes dust particles in the air.

This causes a lot of inconvenience for vapers as the alarm creates a loud sound and often causes disturbance.

So, is there any way to vape without setting off a smoke alarm?

Yes, various ways to smoke and vape without setting off fire alarms exist. I’ll discuss some of the easy methods to bypass smoke detectors.

Can Vaping Set off Smoke Alarm?

It depends on the sensitivity and type of smoke detecting sensors or how close you’re to exhaling the vapor.

The modern fire detectors are designed to avoid false alarms and won’t trigger when vaping.

But, some of the old smoke detectors are very sensitive, and the vape clouds can set them off.

Also, it depends upon the density of clouds. So, if you’re a heavy smoker, you can always trigger a smoke alarm.

A smoke detector and vape detector are two different devices. The functioning of both devices is different. But, people always consider them the same.

Vape detectors are made to catch if someone vapes in a restricted area. These devices are often used in schools and hospitals where nicotine consumption is prohibited.

It mostly detects the presence of nicotine in the air and sends an alert to the concerned authority when someone vapes.

Smoke detectors are made to detect fires in buildings, apartments, schools, hospitals, etc.

It mostly detects the fire smoke and sends the data to the fire alarm control unit. It can also start sprinkling the water in fire areas.

How Does Smoke Detector Works?

Ionization detectors contain a small amount of americium-241(radioactive material), which ionizes the air and creates a current between two plates.

If this current is interrupted by smoke particles, then it triggers the alarm. It’s more sensitive to flaming fires.

On the other hand, photoelectric detectors contain a light source (laser beam) and a light sensor. The light sensor is placed at 90 degrees of the path of the light beam.

If any smoke particles enter the sensing chamber, then it scatters the light, and some parts of the lights deviate toward the photoelectric sensor.

What Are Smoke Sensors Commonly Used in Schools & Hotels?

A lot of advancement has been made with time. These advancements reduced the chances of false alarms.

Nowadays, there is various type of smoke detectors available in the market. But, most schools and hotels use a combination of ionization or photoelectric detectors.

The fire alarm control unit collects data from both types of smoke detectors and filter out the chances of false alarm.

How To Vape Without Setting Off Smoke Alarm?

It’s possible to vape without setting off the smoke alarm. But, if the area is prohibited from vaping or it’s a “No Smoke Zone,” then you shouldn’t vape there.

But the place is allowed for vaping or smoking, but if there is a smoke detector installed, then you can try the following tricks to bypass setting off a fire alarm-

#1- Blow away from the detector

The best way to avoid setting off the smoke alarms is to blow the vape clouds away from the fire detector.

If you’re doing sub-ohm vaping, then the density of vape clouds will be high. So, it’s better to take some distance while exhaling and blow the clouds in another direction.

This method is very effective as smoke particles need some time to reach the sensing chamber.

So, by blowing away from the detector, you’re giving enough time for clouds to disperse.

Another way to avoid setting off a fire alarm is to exhale slowly. By exhaling slowly, you’re reducing the amount of clouds and giving time for them to disperse before it reaches the sensing chamber.

It’s a good idea to take short and slow puffs while vaping near the smoke detector.

If the smoke detector is installed in the bathroom area, it’s better to open the window while vaping.

By opening the window, you’re allowing fresh air to come inside, which will help disperse the vape clouds quickly.

This method is very effective as it will create a draft inside the room, which will help to clear the vape clouds quickly.

Another way to avoid setting off the smoke alarms is to use a fan. By using a fan, you’re creating a draft inside the room which will help to clear the vape clouds quickly.

This method is very effective if you use a table fan near the window. It will help to disperse the vape clouds quickly, and the smoke alarm will not trigger.

E-liquids with high VG content produce more vapor as compared to PG. So, if you’re using a high VG e-liquid, it’s better to switch to a lower VG e-liquid.

I recommend keeping VG/PG ratio at 30:70, which produces less cloud and won’t set off the smoke detector alarm.

Will a Vape Setoff Smoke Alarm in Hotel Room?

Yes, if you’re using a high VG e-liquid, then there are chances that it will set off a smoke alarm in the hotel room.

It’s better to use lower VG e-liquid or take some precautions like exhaling slowly or using a fan to disperse the clouds quickly.

Do Cigarettes Set off Smoke Alarms?

Cigarettes produce a lot of carbon monoxide smoke and will quickly reach the sensing device to trigger the alarm.

So, if you’re smoking near the smoke detector, it’s better to take precautions like exhaling out of the window.

Vaping doesn’t usually set off fire alarms, but if someone vaping closer to the smoke detector can trigger a false alarm.

But, if any vape detector is installed nearby, it can sense the presence of nicotine and send an alert to authorities.

It’s possible to vape without setting off the smoke alarm. But, you need to be careful while vaping near the fire detector.

You can also try other methods like an opening window or a fan to disperse the vape clouds quickly. 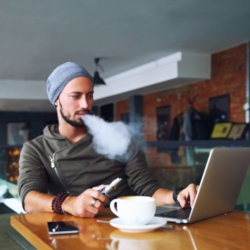